"Stay Up To Date With Our Latest News"


As an FOP Arizona Labor Council member, you can contact the FOP law firm directly. You do not need to get permission from anyone to speak with your attorney. 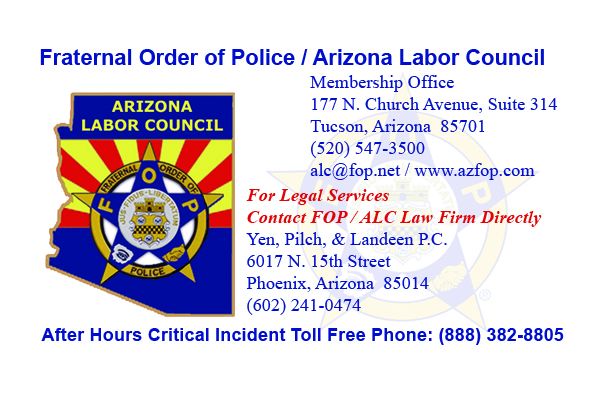 Bob is a second-generation Arizonan, born and raised in Phoenix. Following his graduation from Arizona State University’s College of Law in 1981, Bob served as law clerk to the Honorable Thomas Tang, United States Court of Appeals for the Ninth Circuit. As a judicial clerk, he drafted opinions, orders and memoranda for the Court in cases involving a variety of federal matters including labor and employment issues. Later, he was associated with a small law firm where his practice included issues pertaining to complex Native American water rights, eminent domain litigation, commercial transactions, estate planning, business formation, election and civil rights law.

Active in his community, Bob has served as a faculty member at the State Bar Seminar “The Power of One: Making Cultural Diversity a Reality for the Legal Profession in Arizona” and at the Business Law Forum for Minority and Women-Owned Businesses speaking on the “At-Will” employment doctrine in Arizona. He was a founding director and remains a member of the Arizona Asian-American Bar Association, and served as a volunteer and participating mentor in the Maricopa County Bar Association Cultural Diversity Mentoring Program. Bob’s community involvement also includes service on the Board of Directors for the Phoenix Museum of History and a four-year appointment by the Governor to serve as a member of the State Liquor Board.

Bob was given an “AV” preeminent rating by his peers, the highest quality rating for competence and ethical standards issued by the Martindale Hubbell Law Directory, and he is proud to have maintained that rating for the past 15 years.

Carol is a native of Arizona, born and raised in Phoenix. Carol received her Juris Doctorate from the University of Arizona Law School in 1986. While at the University of Arizona, she was a member of the Arizona Law Review. Prior to law school, Carol worked as a law clerk and assisted in the preparation of complex Native American water rights litigation cases. Following her graduation from law school, she became an associate attorney at a firm in Phoenix, Arizona. As an associate, her practice included civil litigation and continued participation in the Native American water rights litigation cases.

In 1987, Carol helped to establish the law firm of Yen & Pilch, (eventually becoming Yen Pilch & Landeen). Her practice focuses on employment law, civil and commercial litigation and elections law. Carol represents clients in all aspects of labor and employment law. She has handled matters involving Title VII discrimination claims, Age Discrimination in Employment claims, Americans with Disability claims, Family Medical Leave Act claims, and matters brought under the National Labor Relations Act, to name a few. Carol has also handled complex wage claim matters brought under both state and federal law, and other complex civil litigation matters. She has appeared and argued cases before both the United States Court of Appeals for the Ninth Circuit and the Arizona Supreme Court. Carol has also appeared before the Consumer Products Safety Commission, where she helped her clients oversee the largest consumer product recall in U.S. history.

Carol was appointed to serve as a judge pro tem in the Maricopa County Superior Court in 1994 and continues to serve in that capacity, presiding over several cases each year, and handling many settlement conferences.

Carol’s peers have given her an “AV” preeminent rating, the highest quality rating for competence and ethical standards issued by the Martindale Hubbell Law Directory. She is proud to have been selected in 2011 for inclusion in the Bar Register of Preeminent Women Lawyers, a distinction held by less than 5% of women lawyers nationwide.

In June of 2009, Neil was awarded the pro bono “HIV/AIDS Law Project Team Award” for his commitment to providing legal services to the less fortunate. He has also taught Continuing Legal Education courses on police use of force issues and related ethics.

Michael received his Bachelor of Arts degree in 2007 and his Juris Doctorate in 2012, both from Arizona State University, where he edited the law school’s Sports and Entertainment Law Journal and graduated from the Center for Law, Science & Innovation. Michael joined Yen Pilch & Landeen following his admission to the State Bar of Arizona in 2013. His practice focuses on employment and administrative law.

Chad received his Bachelor of Arts degree in 2014 from Brigham Young University and his Juris Doctorate from Arizona State University in 2017. During law school, Chad clerked in the civil litigation department of a private firm. Chad also participated in the Wills for Heroes project which provides free wills to first responders. He now serves as a member of the J. Reuben Clark Law Society and the American Bar Association: Young Lawyers Division.

NEP IS A UNION WORKPLACE!